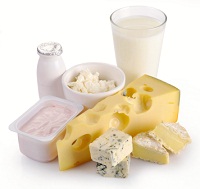 Lactase is an enzyme found in the human body that acts like an agent that decomposes disaccharide lactose and milk sugars. This enzyme is extremely crucial because it assimilates milk sugars, and without it the body couldn’t have any benefits from dairy products.

Lactase divides lactose into its main components, galactose and glucose, and assists the digestion of dairy products. People who lack lactase from the body are known to be lactose intolerant, since there is no other substance to break down the dairy products ingested. Thus milk, that contains the highest level of lactose, will reach the colon undigested where it will be fermented by bacteria and it will produce hydrogen, organic acids and carbon dioxide.

Lactase is produced by the mucous membrane which covers up small intestines and it achieves the highest stage in infancy, since the only biggest source of calories (40 %) comes from breast milk. Normally, the lactase production should stop after this period but given the fact that we live in a modern society with a developed agriculture, milk can be found in every store under many forms and the body has managed to adapt.

The main benefit of lactase is its power to break down lactose molecules and dairy products. This encourages the assimilation of vitamins and nutrients present in milk which improve immunity and increase body strength. When the organism stops producing lactase, dairy products will not only lose their nutritive power, but they will even become harmful.

People who suffer from lactose intolerance should consider taking synthetic lactase.  It is can be easily found in drug stores and it can successfully replace natural substances. After taking lactase, those who can’t digest milk will see an increase in the resistance to intestinal infections, a boost in energy and also a better development and growth in children.

Studies based on control groups showed that this type on enzyme is efficient even for people who don’t suffer from lactose intolerance. Negative aspects such as flatulence and bloating were considerably decreased after using lactase, since hydrogen production and belching were reduced.

This enzyme can also be useful for people who usually experience irritable bowel syndrome, because the hydrogen, organic acids and carbon dioxide are produced in much lower amounts. In addition, lactase has a beneficial role for those with

The intake of lactase pills can help with digestive problems in children with autism. Children with this disease have low disaccharides activity, including low amounts of lactase, maltase and sucrase.

Congenital digestive conditions are now seen much more often than in the past. Children with chronic diarrhea, as well as abdominal distension and cramping can find a solution in lactase supplements. These are extremely challenging digestive illnesses that were proven to respond well to the lactase enzyme. When manufactured commercially, lactase can also be extracted from several types of yeasts and fungi like: