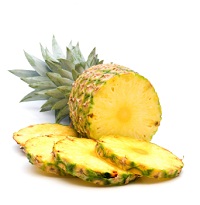 The pineapple plant, or Ananas comosus, contains an enzyme called bromelain specialized in breaking down proteins. Since ancient times people from South America and Central America have used pineapple as a medicinal plant. They used to take the plant, make extracts and apply them on wounds in order to reduce inflammation. Indigestion and stomachaches were significantly reduced in people who were drinking pineapple juice.

In 1891 scientists discovered and isolated bromelain from the pineapple for the very first time. In 1957 it was named a supplement, for treating pain, tingling and numbness of bones and joints. Bromelain is actually a proteolytic enzyme that is able to hydrolyze a great selection of protein types, even if they are established in alkaline or acid environments. It can aid the digestive system to break proteins into smaller-sized parts, like peptides, and furthermore into individual amino acids.

Amino acids are really most important components when it comes to maintaining the production of neurotransmitters, muscles and protein-based molecules. Nonetheless, the benefits that bromelain provide are actually based on the assimilation of the integral enzyme in the small intestine, causing the reduction of inflammation.

Since bromelain can be absorbed without modifications in the small intestine, it is believed to have more optimistic effects on the human body, other than helping digestion and reducing inflammations.

A protease enzyme which could positively influence the heart is a component of bromelain. Thus, it is believed that it can minimize platelets tendency to assemble (platelets are small cells shaped as plates found in the blood) and reduce the creation of blood clots. The latter are renowned for producing cardiovascular disease, so taking bromelain will improve circulation and prevent heart conditions. It is believed that bromelain has an anti-tumor effect as well, because it can help the organism assimilate medications.

For people affected by asthma, colds or excessive mucus production found within the respiratory system, bromelain will certainly minimize the symptoms and also encourage a faster recovery.

Given its anti-inflammatory effects, it can be extremely useful when treating allergies or hay fever and even reducing inflammation after a surgery. In Germany, Commission E recognized bromelain’s benefits in inflammation, sinuses swelling and nose treatments. It is also suggested for sinusitis, breathing problems and congestions.

This enzyme is also utilized for burns, because it was proven to help remove dead tissue produced by third-degree burns and makes the wound heal faster. Bromelain is also recognized as one of the most widespread supplements recommended in treating arthritic pain. It boosts the healing process in a sports injury and it reduces inflammation in sprains, bruises, strains and tendinitis.

When used in mixture with other enzymes liable for hydrolysis of other nutritional substances, such like amylase (digests carbohydrates) and lipase (digests fat), it can reduce indigestion and ease heartburns. It can also minimize bloating and gas, the main symptoms of irritable bowel syndrome.

Even though bromelain is found in pineapple, eating more fruits won’t automatically denote an increase in bromelain’s levels. This enzyme is in fact found in the pineapple’s stem and it’s not that tasty. So as to keep your health and benefit from all its advantages, you could buy capsules that contain the exact amount of bromelain needed.